The sevenshooter of the ‘netherground’. Such is the motto Peter Pontiac chose to bundle his complete works in seven ‘Pontiac Reviews’. During this edition of Stripdagen Haarlem, the final volume of the Pontiac Reviews will be presented: ‘Dossier X-11 (In Autobioscope)’. A monument for the godfather of the Dutch underground. 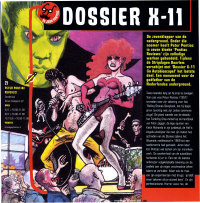 It took no less than two months. Only then Peter Pontiac (1951) was fully satisfied with his art for the ‘Rolling Stones Songbook’ he published in the early seventies collectively with his Leiden commune members. The drawing teems with detail: the Tumbling Dice-motif on Mick Jagger’s bath towel, the empty syringes from Keith Richards’s junkie days, the Hell’s Angels bouncer who with his pals turned the Stones gig during the 1969 Altamont rock festival into a nightmare. Years later, Pontiac could laugh at his endless labour. The uncertainty of the self-trained artist, he recognized. A drawing filled till the very last millimeter to disguise his doubts about his own talent. But also his experiments with drugs: ‘you just can’t stop drawing when you’re stoned’. And his perfectionism. Horror vacui rex, fear of emptiness reigns supreme, as, two decades later, he noted ironically over a likewise hyperdetailed work. 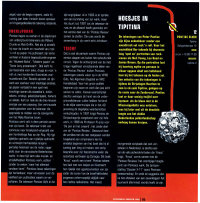 Pontiac starts out in the slipstream of underground artists like Robert Crumb and Rick Griffin. Like them he strives after the raw power of rock ’n roll on paper. He publishes his short stories in legendary Dutch countercultural magazines like ‘Hitweek-Aloha’, ‘Modern papier’ and ‘Tante Leny presenteert’. Also he lives out his fascination for sex, drugs and rock ’n roll with hundreds of illustrations for music magazine ‘Oor’.

Constant in his work is a preference for strong emotions, translated on paper with likewise icons like swastika’s, dollar signs, smileys, hammers and sickles. Short and sharp as the three minutes adrenaline rush of a popsong. A steady base for the artist who grew up amidst the rich iconography of Roman Catholicism.

At this stage, Pontiac’s life and art are one. The artists rambles from commune to squat with a serious Monkey on his Back. He adds temporary art job to temporary art job and repeatedly fully disappears from the radar, swallowed by the Dutch narcotic night. In these days, every Dutch music and comics aficionado is familiar with Pontiac’s work, only without knowing ‘where it all comes from.’ Pontiac’s drawings are instantly recognizable, yet they are blown about the multitude of publications that publish them. All this time, the artist Pontiac remains elusive. As early as 1983 there is talk of collecting his work, but it will take until 1991 before the artist finds the calm and the distance to make the seletion for the first volume of the Pontiac Reviews. It is only then that the coherence of his art becomes fully visible.

This is the same period that Pontiac makes his first steps outside of the subcultural scene. Against the backdrop of the slow rhythm of the subsequent ‘Pontiac Reviews’, Pontiac’s illustrations start to appear in national publications like ‘VPRO Gids’, ‘Algemeen Dagblad’ and ‘NRC Handelsblad’. Only at this time, the general audience starts to put his name and his art together, although probably no more than a few recognized the underground artist’s hand in the funny ‘weather mice’ that illustrated the newspaper weather reports in ‘Algemeen Dagblad’ for years.

In 1997, Pontiac is awarded Dutch national comics prize Stripschapprijs for his complete works, in 1998 the Professor Pi-award for ‘De pen en het zwaard’ (‘The Pen and the Sword’) volume of the ‘Pontiac Review’. Encouraged by the subsidies, which, at that time, are starting to be accorded to comics artists, he finally starts working on the project he has been talking about for twenty years: a comics biography of his fascist father who disappeared on the island of Curaçao. This book ‘Kraut’ turns out nothing less than a triumph. Pontiac draws it coolly in ballpoint and richly illustrates it with egodocuments from his father, which show how the good catholic boy slowly but surely sinks into the extreme rightwing political swamp. One of the most intriguing comics ever published in the Netherlands, is but one of the rave comments for ‘Kraut’. Together with the ‘Pontiac Reviews’, ‘Kraut’ makes up the pinnacle of Pontiac’s art – so far. The exhibition ‘Peter Pontiac – Dossier X-11′ proves that after seven shots, there’s no reason why the fireworks should be over yet.

Peter Pontiac’s art is virtually unthinkable without a rock ’n roll soundtrack. For decades, he drew spot on portraits of rock icons like Lou Reed, Neil Young and James Brown for the national music magazine’ Oor’. On these portraits Pontiac feverishly fuses myth and person, like he had a hellhound on his trail while drawing. A selection of these drawings is on show during the Stripdagen Haarlem festival in cd shop Tipitina, right on the way to the Pontiac exhibition in Zanderzaal. In Tipitina, Pontiac leaves little doubt: if the blues wouldn’t have come about in the Mississippi delta, it would have come crawling out of the delolate emptiness of the Dutch flatlands.