“By far the most fun, the most interesting and the most universal exhibition on show during the Stripdagen Haarlem 2006 comix festival” Belgium national daily ‘De Morgen’, June 6, 2006

An overview of wordless comix or ‘la bande dessinée muette’ as the basic building blocks of the comix medium: concept by Lewis Trondheim, further developed by nET eCHT mEDIA
June 3 – July 9, 2006, De Vishal Gallery, Haarlem city square, The Netherlands; 6,100 visitors counted; have a peek at the information panels below… 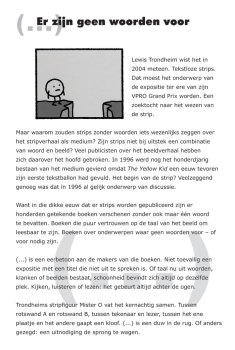 Back in 2004, Lewis Trondheim knew straight away. Wordless comix, la bande dessinée muette. That would be his exhibition theme of choice for the occasion of the VPRO Grand Prix. A search for the heart of the comix medium.

In the one century (or so) that comix have been published, dozens of books have been drawn without one single word. Books which solely work with visual language to be legible. Books about subjects for which there’s no words – or no words are needed.

(…) is a tribute to the artists who made these books. It goes without saying that it should be an exhibition with a title which itself is impossible to pronounce. Whether language is codified in words, sounds or images, beauty is always to be found at the very same spot. Looking, listening or reading all are coming from exactly the same place. It all happens behind the eyes.

Trondheims character Mister O nicely sums up this idea. Between rock A and rock B, between artist and reader, between one image and the other, there’s a gap. (…) is a push into that gap. Or put differently: an invitation to go and try leaping. 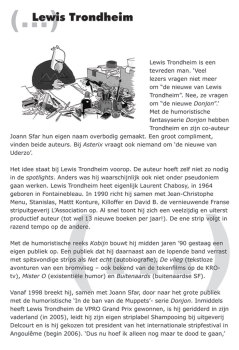 Lewis Trondheim is a satisfied man. ‘Many people do not ask anymore for “the new Lewis Trondheim book”. No, they ask for “the new Dungeon”.’ With the humouris fantasy series Dungeon, Trondheim and his co-author Joann Sfar have succeeded in making their own names obsolete. It’s hard to receive a greater compliment, both authors contend. With Asterix, no one is asking for ‘the new Uderzo book’.

For Lewis Trondheim, the idea is paramount. The author doesn’t necessarily crave to be in the spotlights. Otherwise, he wouldn’t have started working with a nom de plume in the first place. Lewis Trondheim’s real name is Laurent Chabosy, born 1964 in Fontainebleau. In 1990, together with Jean-Christophe Menu, Stanislas, Mattt Konture, Killoffer and David B., he creates the vanguard French comix editor L’Association. It doesn’t take long before he proves himself a versatile and extremely productive artist (up to 13 books a year!). One Trondheim book always quickly follows the other.

With the humourous ‘rabbit-com’ series Lapinot, in the mid 90s, he quickly establishes his own following. Aside the Lapinot series, he keeps on surprising his audience with inventive books like Approximativement (autobiography), La mouche (wordless adventures of an ordinary fly), Mister O (existential humour) and A.L.I.E.E.N. (extraterrestrial SF).

As from 1997, Trondheim experiences a breakthrough, together with Joann Sfar, with the humourous ‘The Fellowship of the Muppets’ fantasy series Dungeon. Ever since, Lewis Trondheim has won the 2004 VPRO Grand Prix, he has been knighted in his home country France (in 2005), he has been leading his own comix label Shampooing at Éditions Delcourt and he has been chosen as Président at the international comix festival in Angoulême (early 2006). ‘So now the only thing left to do for me is to wait and die,’ as he remarks characteristically tongue-in-cheek on his website. 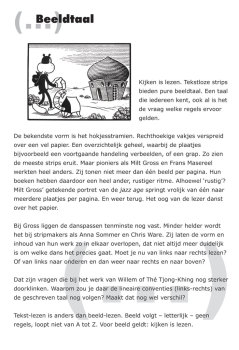 Looking equals reading. Wordless comix make use of a purely visual language. A language that every human being instinctively knows, although many wonder what exactly are its rules.

Best known is the so-called comix grid. Rectangles spread out on a page. A well-ordered structure with discrete panels which show an ongoing act, or a joke. It is the way most comix function. Yet comix pioneers like Milt Gross and Frans Masereel worked quite differently. They show no more than one image per page. Their drawn books thus follow a different, more quiet rhythm. Although, ‘quiet’? Milt Gross’s portrayal of the jazz age seems to jump, sweat and shake from one to several images per page. And back again. The eye of the beholder dances along the pages.

At least, with Gross, the dance is more or less clear. Things get less clear-cut with artists like Anna Sommer and Chris Ware. They fuse form and content in such a way, that it is no longer clear what sort of dance is going on. Should their comix be read from left to right? Or rather from left to below to right and then up? These questions get even more ‘serious’ with artists like Willem or Thé Tjong-Khing. Why follow the linear (left-to-right) conventions of the written word? Why not ‘think outside of the box’? 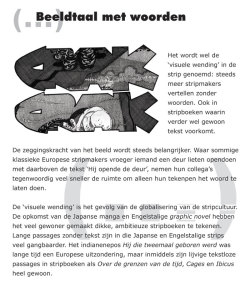 It is known as the ‘visual turn’ in contemporary comix: an ever increasing number of comix artists tells stories without words. This also goes for those artists who do use the written word.

The power of the image is gaining ever more importance. In classic European comix some artists would show someone opening a door and add in a text frame: ‘He opened the door’. These days, comix artists are much more inclined to not tell ’em but show ’em.

The ‘visual turn’ is related to the globalisation of comix culture. The rise of the graphic novel and Japanese manga has opened up possibilities for producing voluminous, ambitious comix. These are books which offer much more space for long wordless scenes than the traditional 48 page European comix format used to do. For a long time, Derib’s American Indian epic Celui-qui-est-né-deux-fois was a European rarity, but in the meantime wordless scenes have become quite common in contemporary comix such as Où le regard ne porte pas, Cages or Ibicus. 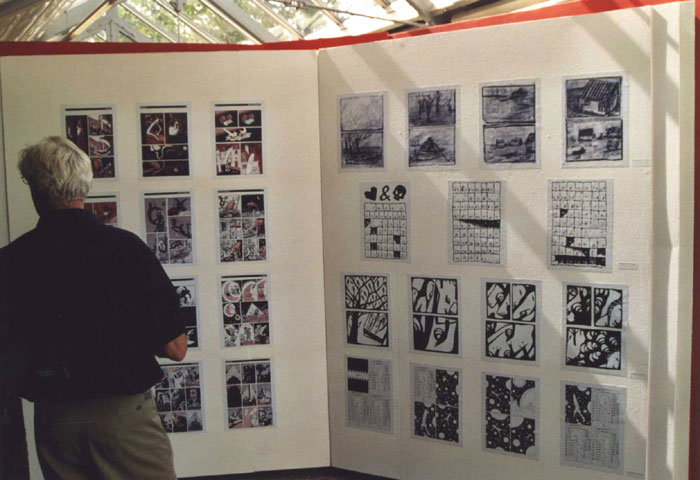 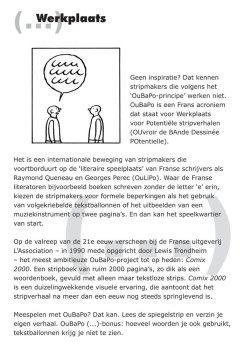 No inspiration? Artists who follow the ‘OuBaPo’ principle have no such problem.

OuBaPo is a French acronym meaning Workshop for Potential Comix (OUvroir de BAnde Dessinée POtentielle). It is a loose international comix movement which builds upon the ‘literary playground’ that was created by such French writers as Raymond Queneau and Georges Perec (OuLiPo). Where the OuLiPo pioneers for instance wrote books without using the letter ‘e’ (La Disparition), OuBaPo artists choose to work with formal limitations such as solely using illegible word balloons or silently expressing the sound of a musical instrument in the space of two comix pages. And then it’s playtime.

On the brink of the 21st century, French editor L’Association – co-founded back in 1990 by Lewis Trondheim – published the most ambitious OuBaPo project so far: Comix 2000. A monster book the size of a dictionary, Comix 2000 is a showcase of global wordless comix. As such, it offers a stunning visual experience, which proves that the comix medium, after more than a century, is still very much alive.

Feel like playing along with OuBaPo? Why not give it a try: read the mirror comix and make up your own story. OuBaPo (…) bonus: no matter how many words you use, no word balloons will show up. 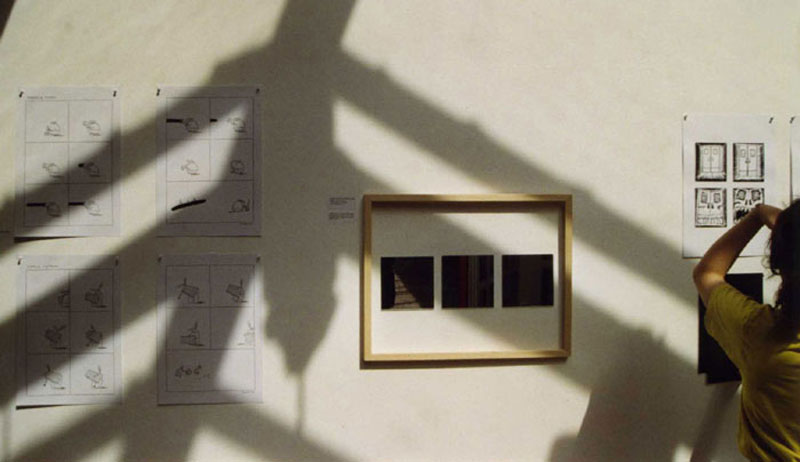 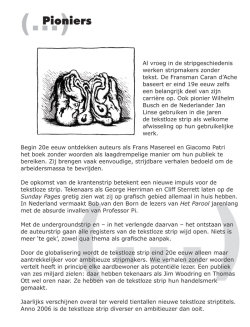 Already early on in comix history artists told stories without words. Frenchman Caran d’Ache, for instance, based a substantial part of his career on drawing wordless jokes. Other pioneers, like Wilhelm Busch and Dutchman Jan Linse, also used wordless comix as a welcome variation on their usual work.

In the early decades of the 20th century, authors like Frans Masereel and Giacomo Patri discovered the wordless book as an attractive way to reach their audience. They typically told easy-to-follow stories with the express intention of freeing the international masses of suppressed workers.

The rise of newspaper comix opened a new chapter for wordless comix. Artists like George Herriman and Cliff Sterrett loved to use the Sunday Pages to show off their impressive graphic talents. In the Netherlands, Bob van den Born entertained the readers of ‘Het Parool’ newspaper with the absurd wordless adventures of Professor Pi.

With the birth of underground comix and – shortly after – of ‘auteur comix’ wordless comix changed to full gear. No theme or graphic style was considered too ‘far out’ and a thousand wordless comix blossomed.

Towards the end of the 20th century, globalisation made wordless comix all the more attractive to artists. By telling stories without words, they could reach a potential global audience of six billion readers. Artists like Jim Woodring and Thomas Ott did not hesitate and made wordless comix their trademark.

Nowadays, yearly literally dozens of new wordless titles are published. Wordless comix anno 2006 are more diverse, alive and ambitious than they have ever been before. 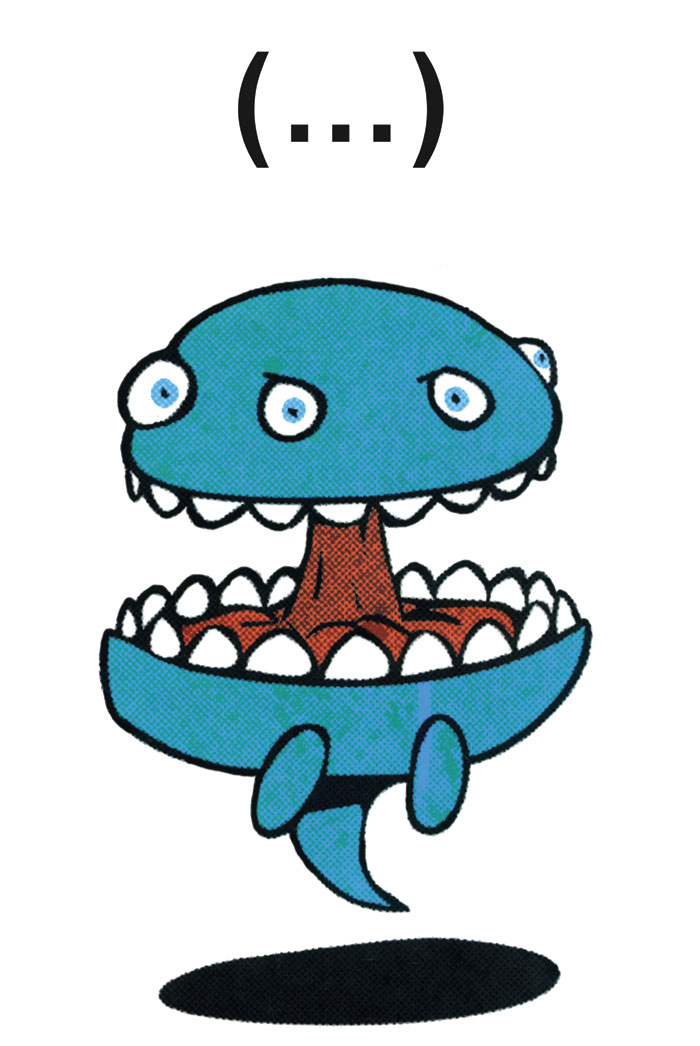